A progression of venues for the Rowland Scherman Project
2008 to present: 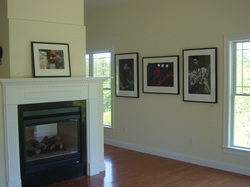 The Pinehills is an residential golf community of custom built homes located in Plymouth, Massachusetts.(www.pinehills.com) Each Spring they have an "Arts on the Green" event. Our photographer, Rowland Scherman was invited to be the featured artist in June 2008.

Initially, we were generously offered space in a tent on the Green. Our exhibit consisted of large framed archival photographic prints that really needed indoor space. After explaining this, we were offered space in a bank next to the Green, but it only provided room for 5 or 6 images! We were courageous! We asked for more!

In the end we worked out a win-win situation for everyone by hanging the exhibit in a model home provided by one of the builders deep inside the Pinehills. The Pinehills management  provided a place next to the Green to hold a raffle of one of Rowland's photos and a cute little trolley to shuttle folks from the Green to the exhibit and back.
The builder had 200 people see his model home, The Pinehills had 200 people take a 10 minute ride through their development, and we had 200 people see Mr. Scherman's photos for the first time! Now how cool is that? 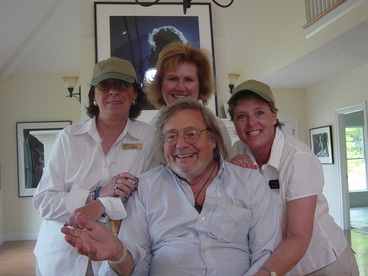 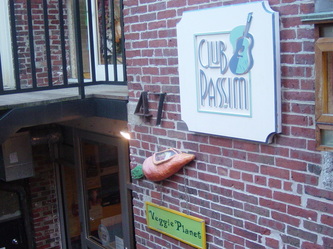 Originally the old "Club 47", Club Passim (www.clubpassim.org)  features acoustic music, poetry, art shows, folk, blues and jazz seven nights a week.  After visiting our first exhibit of Mr. Scherman's work, the folks at Passim  invited us to hang out with them at the Club for about a month. They hosted a reception in September of 2008. Rowland gave a powerpoint presentation and fielded questions. We switched out the images from time to time to help maintain people's interest. 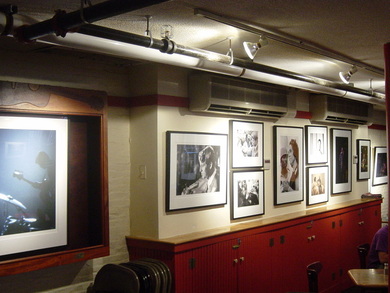 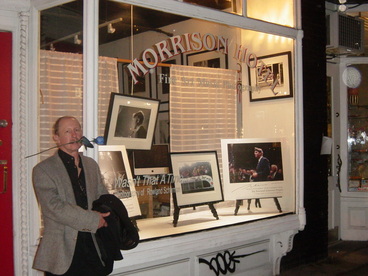 The Morrison  Hotel Gallery(www.morrisonhotelgallery.com)  hosted a reception for Rowland where he gave a presentation and slideshow to an appreciative audience. Unfortunately, it was the night the financial markets tumbled in Sept. 2008.  "Timing is everything",  they say. 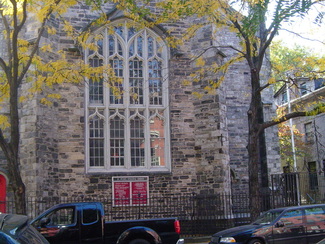 Not to be deterred!
Still in NY in November 2008...In anticipation of the busy Holiday season ahead, we decided to try and find another venue in The City.  Instead of packing everthing up and returning to the Cape, we approached the Rector of this historic church in Chelsea with a proposal.  We'd hang a show and give 10% of print sales to the church's food pantry program. He thought this was a great idea and we did it!
Prior to the opening reception we invited the curator of the I.C.P. ( International Center for Photography ) in Manhatten to review the work. He came before the reception and met Rowland.  Next day, we were given a private tour of the I.C.P.! 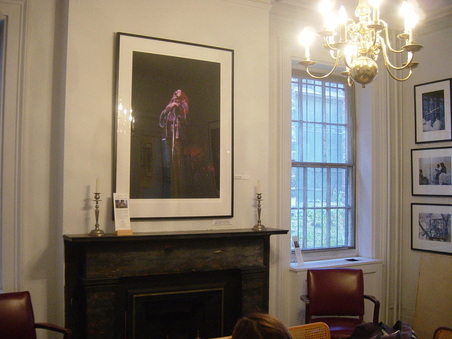 While we were in Chelsea we saw an empty storefront on the corner of W 22nd St. and 8th Ave.  "Wouldn't it be great if we could move the show there!", I said to my wife....Little did I know that it was going to happen! 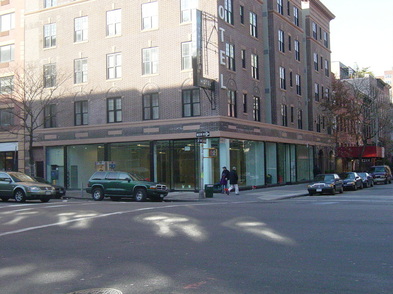 We had a volunteer P.R. person from Saint Peter's Episcopal Church who heard us talking about the vacant storefront. She went to the owners of the hotel (www.thegemhotel.com) suggesting that they could benefit by allowing us to exhibit the work with 10% of print sales going to the Saint Peter's food pantry. The management at the Gem said "as long as the public is not allowed inside". This sounded great!  So, we curated the exhibit to be viewed from the sidewalk!  Hundreds, if not thousands of people must have seen it. It was there for  six weeks, right through the holidays! 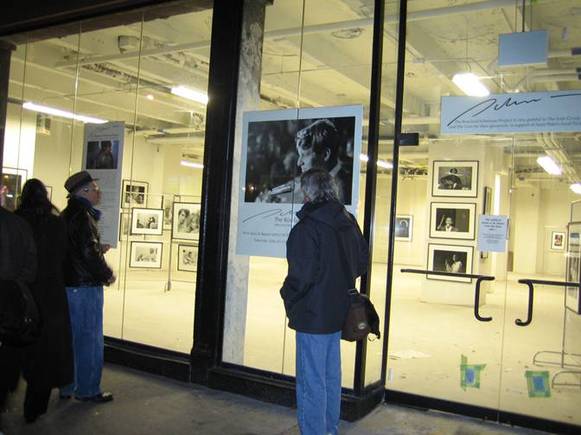 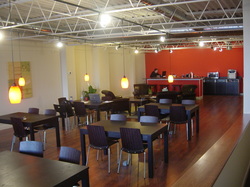 This was an idea ahead of its time. A large library-like shared office space with wireless high-speed internet & printing, coffee bar, and private conference rooms.  It was run on a membership basis. Open 24/7, all you needed was your electronic key card to get in. Then, your use of the facilities was automatically tracked and you'd be billed accordingly. It was perfect for start-ups, independent business people, and travelers. We were invited to exhibit several photos meant to inspire great thoughts and ideas. Mr. Scherman's images were there from May 2009 until Spring of 2010.  Again, we switched out the images from time to time.

The Harvard Square Business Association teamed up with the New England Folk Music Archives (www.newenglandfolkmusic.org) and unveiled the  Community Gallery Window Project in November of 2009.  Windows of merchants, restaurants and banks featured vintage photos, folk art and Harvard Square folk music history ephemera .
We were honored to be asked to loan some of Rowland's early folk music images for the exhibit. 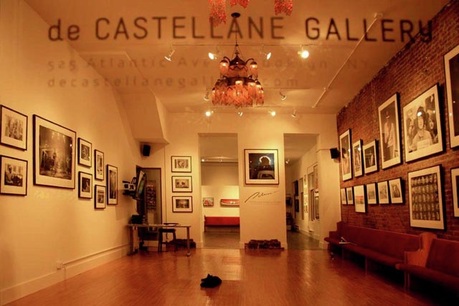 Hans de Castellane grew up on Cape Cod and owned and operated his own mural business there for ten years, with 138 murals to his credit.

Hans happily returned to Brooklyn in 2010 to follow his dream of opening his own studio / gallery. (www.decastellanegallery.com)  Hans invited Mr. Scherman to be his featured artist at his grand opening in March 2010. 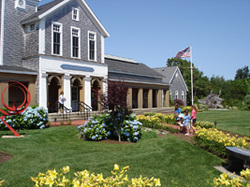 The CCMA (www.ccmoa.org)  had wanted to host a show of Mr. Scherman's photography for a couple of years. Rowland wanted to take advantage of this as an opportunity to exhibit something beyond the imagery produced as part of The Rowland Scherman Project, LLC. We put together a small but comprehensive collection including several portraits, and an essay he'd done while living in Birmingham, Alabama called Highway 11.   This exhibit ran from March 6 to April 11, 2010. 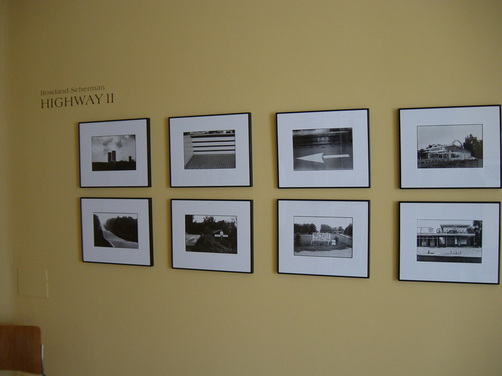 The "Z" is a really cool Vaudeville era theater in the restored downtown of the City of New Bedford. (www.zeiterion.org)  They provide performing arts programming of excellence that inspires, educates, engages and entertains. A local Cape Cod radio executive suggested we contact the "Z" since they were going to host a play, RFK, The Journey to Justice .
We contacted them and took  portfolios of contact sheets and an armful of framed images to our first meeting.  Upon seeing many of Mr. Scherman's iconic 1960's images, a really neat process began!

The "Z" had a space next to the lobby of the theater that they had been wanting to clean up for years. They proposed that if we would provide an exhibit of RFK and other civil rights images, they'd paint the space, provide lighting, promotion and even a reception on the night of the performance.
They were going to have 900 students view the photos and attend an early performance of the play.
RFK, The Journey to Justice ticketed performance was the evening of Feb. 26, 2010.
It was extremely moving, Mr.Scherman's photographs added another dimension to the audiences' experience.

The "Z" also invited us to collaborate on a show with Judy Collins in April! 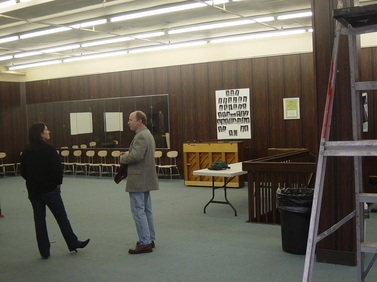 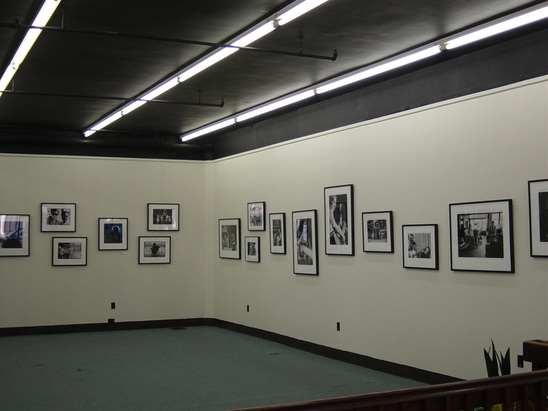 Judy Collins at the "Z"

Rowland had toured with Judy Collins for a month as a free lance photographer for Life Magazine in 1969. He hadn't spoken to her since. Then in 2009 he tried calling her in N.Y. and she answered the phone. They had a nice chat and she said something like, "I'm sorry Rowland, I'd love to talk more, but I'm performing in 20 minutes!"
Unbeknownst to anyone, we would be invited to hang an exhibit of Judy Collins and Crosby, Stills & Nash images in conjunction with Ms. Collins performance at The Zeiterion Theater in April of 2010!

It was great!  Ms. Collins voice was amazing!  Rowland went backstage before the show and reunited with Judy.
Between sets, she pointed Rowland out in the audience and asked everyone there to go into the Gallery after the concert to see our exhibit. Then to top it all off, Judy came into the gallery to view the exhibit with Rowland and the crowd. What a night! 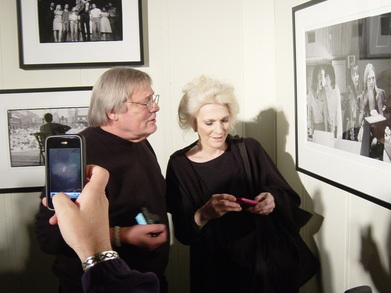 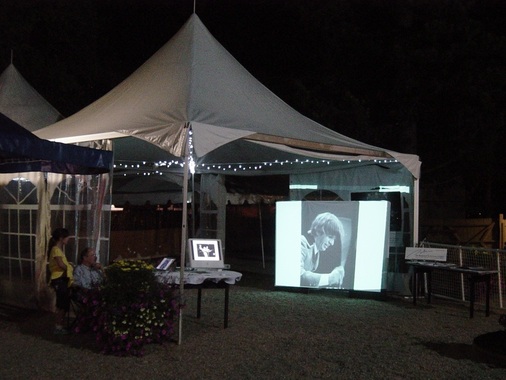 The manager of The Tent (www.melodytent.org) has been a great supporter of our efforts to get Mr. Scherman's work into the public eye.  He invited us to bring the framed 10 piece box set of The Beatles to hang on the night of the concert on June 24, 2010.  We were concerned about thunderstorms, wind and humidity so offered to set up a digital projection of the images instead. We also had a slideshow of other images on a computer screen for people to see. The concert was really well done, with the performers changing costumes and hair to match the chronology of the Beatles career. 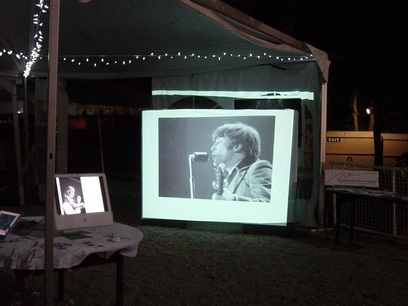 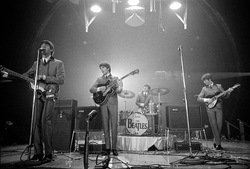 The Beatles-copyright Rowland Scherman
In July of 2011 Rowland participated as featured artist at  an exhibit called "We shot Rock & Roll" at ARTFOLK GALLERY in Birmingham , AL.  This show was sponsored by the Birmingham Museum of Art, as a companion to the nationwide traveling exhibit "Who shot Rock & Roll". 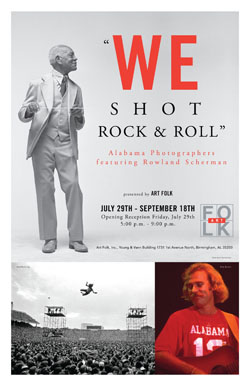 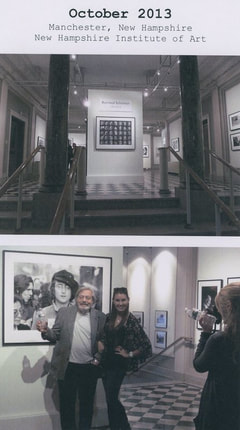 In 2012,  Mr. Scherman's work w﻿as exhibited at Panopticon Gallery in Boston, MA  (www.panopticongallery.com), and this past summer his photos of Arthur Ashe were exhibited at the US OPEN.

"Eye on the Sixties"
We collaborated with independent film maker Chris Szwedo, whose masterful documentary about Mr. Scherman premiered on January 13, 2013 at the Cape Cinema in Dennis, MA  (www.capecinema.com). You may view a trailer of the film@  www.vimeo.com/39684189.

A retrospective of the work of Grammy award winning photographer Rowland Scherman. This exhibit includes photos from his work as a free lance photographer in the 1960's where he captured many of the decades iconic musical, cultural and political events including the 1963 Newport Folk Festival, the March on Washington, the Beatles first US concert, and Woodstock. Images of Bobby Kennedy campaigning for the presidency, Arthur Ashe as an amateur, Barbara Walters, John Lennon and more. Also included are highlights of photo essays, “Elvis is Everywhere”, “Love Letters”, and “US 11” documenting life along the Alabama highway.

A special exhibit commemorating the 50th anniversary of The March on Washington.